In this article we put a revered (and exorbitantly priced) analogue equaliser up against a clean digital plugin in an effort to isolate the sonic signature of this coveted unit.

Participate in the anonymous poll   (11 questions)

The results so far…

This story starts with a Sontec MES-432C coming for a little visit to Matthew Gray Mastering where I work.

The unit belongs to Tony Mantz aka Jack The Bear and was taking the scenic route home after a sprucing up by JLM Audio.

Matt has owned this same model in the past, but for me it was the first time laying hands on one of these legendary EQs.

People talk about the magic of the Sontec sound – and it would seem this magic is reflected in their price tag. They are one of the original parametric equalisers and their heritage dates back to the 60s. Some engineers have stated that they cannot find another EQ that does what their Sontec does.

Not surprisingly, it was a real pleasure to use. The curves can be broad and musical or tight enough for corrective work. The stepped knobs have just the right amount of tension and the layout is clear, intuitive and easily read with a glance.

In terms of boxtone, it seemed clean and precise. I found myself thinking I would like to track down this Sontec magic – and isolate it if possible – so I could clearly hear it without any bias. I figured that if I could remove all other variables this might be achievable.

I asked Matt if it would be okay to dedicate a few hours of studio time to this pursuit – it turned out he was just as curious as I was. And so it began…

A selection of audio was printed through the Sontec at eleven different settings – some were subtle real-world curves while others were quite drastic in order to accentuate any unique qualities that may exist.

The source material was also printed through the mastering console with nothing inserted (to remove it as a variable). These captures were then processed with a digital plugin EQ using presets carefully matched to the hardware.

The end result is a set of files in which the only audible difference should be the Sontec signature.

The eleven settings that were captured are shown in the figures below: 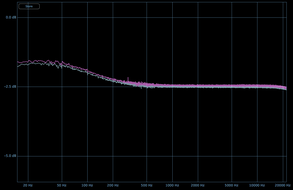 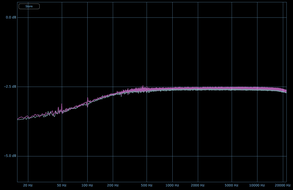 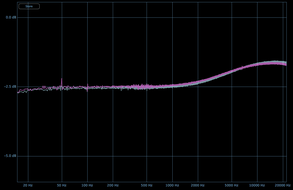 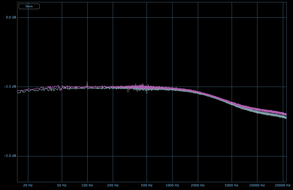 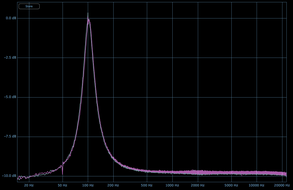 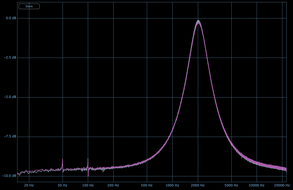 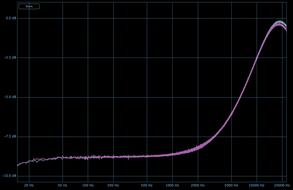 *Please note that the scale and unity value varies between images

DDMF PluginDoctor was used to analyse the frequency magnitude response of the Sontec for each EQ setting. These curves were then matched with DMG EQuilibrium.

The original plan was to enlist TDR Nova as the digital contender since I am a big fan of the Tokyo Dawn product range and ethos, Nova being my go to ITB for corrective duties.

However, Matt pointed out to me that the smallest gain increment Nova offers is 0.1dB (perfectly adequate in normal usage scenarios) while his own go to, EQuilibrium, allowed for the curve to be matched to a much finer degree including dialling in the very small – often less than 0.1dB – tolerance differences between left and right channels.

As a result, the curves have been recreated with a very high degree of accuracy to the hardware.

The image above is zoomed in considerably. The differences between L and R channels of the unit were generally less than 0.1dB – a testament to the circuit itself and to Joe Malone's excellent work re-calibrating it. The squiggly (noisy) lines are the Sontec and the smooth lines running through the centre are EQuilibrium.

Below we can see the frequency magnitude response of the mastering console without the Sontec inserted. The source material was captured through this before being processed with the EQuilibrium presets.

And here is the console with the Sontec in:

Note how it is adding ~0.5bB of gain even with all bands set flat. Interestingly, this gain increases (and so does the difference between channels) when boosting a band as you can see below.

It is also worth noting that the Sontec has an inversely proportional Gain <> Q relationship, meaning the bell becomes wider as it is boosted.

REAPER was used for both playback and recording of the samples.

Once all the source material was printed through the analogue chain it was trimmed, lined up visually and null-tested to find the closest possible sample alignment. The matching EQuilibrium presets were then applied to the console-only passes.

The loudness was compared between related files, but no gain changes were needed since the levels were already matched in the curve presets.

Lastly, the files were randomly labelled A or B per each EQ setting.

I was originally inclined to label them completely randomly, but instead of 11 questions in the poll there would have been 66 and no one would have bothered!

Here is another link to download the audio files in case you missed it at the top.


All files were captured at 24bit 48kHz.

The following adjustments were made to EQuilibrium's advanced settings:

The pairs have been aligned to the nearest sample and loudness matched.

How to use these files

The best approach would be to perform a blind AB or ABX comparison. In this way you can establish beyond doubt that you are reliably hearing a difference.

Use ‘Shootout Mode’ and simply pick the one that sounds better. Perform a trial of 10-15 comparisons for each pair, this will ensure the results are meaningful.

A less rigorous alternative would be to arrange the files in your DAW such that you can toggle between A and B with a single button press. You can then:

Most of the time when blind comparisons are posted on the internet, a handful of people will take a public guess or give their impression, some will send a private message and others will wait until the answers are revealed before giving their opinion. A certain amount of time was spent creating these files and we think it would be a shame to have it play out in the usual manner without getting at least some reliable data on just how audible these differences are.

With this in mind, we have set up an anonymous poll that will hopefully encourage participation with zero risk to reputation.

The poll can be found here.

Once people have begun contributing to the poll, we will update this post with the percentage of how many questions have been correctly answered. We will continue to update this as more people contribute.

If you would like to join in the discussion you can check out the post on Gearslutz and in the facebook groups Mastering Engineers Worldwide and Sontec Users Group.

Thanks to Matthew Gray for allowing me to ‘waste’ a big chunk of studio time preparing these audio files, and for his ideas on how to make this work.

Thanks to Tony Mantz aka Jack The Bear whose MES-432C we used for this little experiment.

And thanks to Sangdae Yang aka Trance Animal for providing his music, you can find the full track here: https://www.youtube.com/watch?v=FIETeCg7Ec0